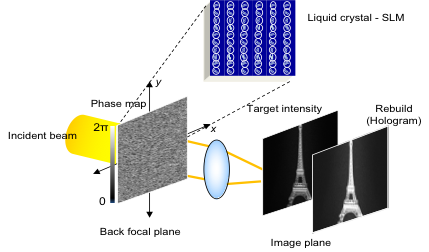 Can you introduce yourself and tell us about your area of research or expertise ?

Valentina Emiliani is a physicist working in her early carreer on quantum physics. In the early 2000’s she started working in interdisciplinar projects at the interface between physics and biology. Her implication to neuroscience started when she moved to the Neurophysiology and New Microscopies Laboratory at Paris Descartes University, where she formed in 2005 the “Wavefront Engineering Microscopy” group. Eirini Papagiakoumou is also a physicist who joined the group of Valentina in 2007 as a post-doc, and has been always working in the optics-biology interface. Together with Valentina, they pioneered the use of a number of wavefront laser beam shaping microscopy techniques for efficient photoactivation of caged compounds and optogenetic molecules in neuroscience, techniques based on computer generated holography, generalized phase contrast and temporal focusing, aiming to offer to neuroscientists tools that enable simultaneous multicell neuronal photoactivation at high temporal specificity and near single-cell spatial selectivity. Most of these systems are currently unique worldwide. The group has integrated the Vision Institute in Paris, in 2018, as part of the newly formed Photonics Department directed by Valentina Emiliani. Since then our research focuses on the use of these approaches for the investigation of visual circuits in different animal models (mice, zebrafish larvae, drosophila embryons).

What is wavefront shaping and Computer-Generated Holography for microscopy?

"The goal is to generate arbitrary excitation patterns that can either mimic the shape of particular cellular processes of neurons or target multiple regions of interest at the sample, of the same or different size, simultaneously."

Wavefront shaping includes the techniques that use modulation of the phase wavefront of the electric field of a laser beam in order to achieve a certain intensity modulation of the beam at the focal plane of the microscope objective (Note that phase-only modulation of the electric field is sufficient to generate a desired intensity pattern without the need of additional or simultaneous electric field’s amplitude modulation). The goal is to generate arbitrary excitation patterns that can either mimic the shape of particular cellular processes of neurons (soma, axon, dendrites) or target multiple regions of interest at the sample, of the same or different size, simultaneously.
A very simple case of wavefront shaping is for instance what happens when we use a lens to focus a collimated light beam on a small spot: the flat wavefront of the collimated beam is curved due to differences in the optical path that each light ray follows inside the lens (the lens being thicker at the center and thinner at the edges), such as the beam rays refracted from the lens are all gathered to a point. Imagine, now, that this lens can be substituted by a piece of material with a gradient of refractive index from the center to the edges (higher index in the center, lower in the edges). In that case wavefront curving happens because of the local differences in the refractive index. To generate more complex patterns than just a point, we can use an optical element that modulates the spatial phase of the wavefront of the beam in a specific way almost for each light ray. Such optical elements, performing local phase modulation by local change of the refractive index of a medium are devices using pixelated liquid crystal arrays. The liquid crystals, when controlled by a certain amount of voltage, can change their orientation and thus the refractive index of the medium locally. We call them Liquid Crystal Spatial Light Modulators (LC-SLMs or simply SLMs). The amount of voltage that needs to be addressed to each pixel is defined by the amount of the corresponding phase modulation. A phase modulation map can be derived by using calculation algorithms that, given a target intensity at the objective focal plane, can generate the appropriate phase modulation of the electric field at the objective back focal plane (the Fourier plane). The illumination of the phase map with a laser beam enables generating a light shape (hologram) that reproduce the desired target, as in conventional holography. The fact that both the image template and phase maps are defined by using a computer, the technique is called Computer Generated Holography.

You lead the training Optical control of brain functioning with optogenetics and wave front shaping with CNRS Formation Entreprises, what does it consist of ?

"Our training course allows to have an overview of the current state-of-the-art in neuronal photoactivation methods, learn in deep the aspects of our approaches, watch our microscopes working in real time experiments, manipulate with optics themselves, and get all the relevant information to build their systems…"

The new approaches that we have been presenting all these years are currently used in a series of collaborative projects, including the analysis of Zebrafish swim circuit, the study of calcium dynamics in respiratory-related neurons, the investigation of the pathophysiology of the visual system, the investigation of retinal circuits and the optical detection of neuronal membrane voltage. Collaborators are often willing to develop similar systems to their laboratories for assuring the continuity of adressing their biological questions. Our laboratory has established an industrial partnership with the company Intelligent Imaging Innovations, (3i; Denver, CO, USA), who now commercializes systems for single- or two-photon Computer-Generated Holography, the latter optionnally in combination with temporal focusing microscopy. The goal of this partnership was to facilitate the use of our techniques in biological environments with user-friendly systems for diffusing our technology to neuroscience laboratories that do not dispose the adequate background in optics to build their own custom microscopes. Nevertheless, laboratories working in the optics-biology interface are aften tempted to develop their own systems for manipulating neurons in order to have some flexibility in the choice of techniques and performances. In the last 10 years we have been contacted by many of those and we have been helping them in designing and building their microscopes according to their needs. That gave us the idea of creating a training course where scientists interested in our approaches could have an overview of the current state-of-the-art in neuronal photoactivation methods, learn in deep the aspects of our approaches, watch our microscopes working in real time experiments, manipulate with optics themselves, and get all the relevant information to build their systems. CNRS formation entreprises supported this idea and the course took place for the first time in 2018, with our arrival at the Vision Institute.

Who is this training intended for and what skills does it bring to the participants ?

"Our optical methods can find application in other neuronal photoactivation or imaging approaches, like uncaging of caged neurotransmitters (photolysis), photoactivation by nonlinear excitation of nanoparticles, by laser-generated local heating, or voltage imaging."

The course takes place in 5 full days and it is destinated to PhD students, post-docs, researchers, engineers or technicians of any discipline, who work in the field of optical microscopy for manipulating neuronal activity. In the course we focus on neuronal manipulation via optogenetics and calcium imaging, as this is the current expertise of the group, but in principle our optical methods can find application in other neuronal photoactivation or imaging approaches, like uncaging of caged neurotransmitters (photolysis), photoactivation by nonlinear excitation of nanoparticles, by laser-generated local heating, or voltage imaging.
The training course includes a theoretical and a practical part. The theoretical part consists of 15 hours of lectures during the first 4 days in the morning. The lectures are given by members of the Emiliani group and by external recognized scientists, physicists, biophysicists or neurobiologists. The lectures usually start with an introduction to optogenetics and an overview of the state-of-the-art in optical methods used for neuronal activation. A detailed description of those methods is following, presenting the advantages and drawbacks of each of them, by emphasizing mostly on Computer-Generated Holography which, in common agreement, is the method that revolutionized photoactivation in neuroscience. More details are offered, as well, in terms of opsin engineering and viral vector design for opsin delivering to mammalian neurons by specialists in the field.
The practical part starts already from day 2 and is organized in 4 days of more than 4-5 hours of experimental demonstrations and practice of the participants. The participants are divided in 3 workgroups, each group participating in one experiment each day. The experimental demonstrations include in vitro and in vivo manipulation of neurons and how to build a two-photon holographic microscope with temporal focusing. In these demonstrations the participants are mainly watching the experiment, they follow a detailed presentation of the components of the optical setup and, according to their competences, they are welcome to manipulate themselves, acquire data such as images or time-lapses of neuronal activity, axial stacks of holographic spots, or even to intervene on the optical setup for changing a component and see the effect on the holographic spot properties. There is also a practical course where participants build a simple holographic setup on their own. They are called to choose the appropriate optical elements and they get familiar with the use of liquid-crystal based spatial light modulators, the key-device for performing phase modulation of the electric field of a laser beam in computer-generated holography. Putting hands on an experiment is something that is well appreciated in this kind of trainings. The final goal is that participants are able to design and eventually build a simple holographic setup.
The last day of the training, the participants are gathering the data that have collected the previous days, they perform their analysis, and they make a short presentation to explain them. Moreover, each participant is welcomed to talk a bit about his own project and how he believes he can apply to it what he learned during the training, or to present a general idea where he could use the methods he discovered. In this way, we make sure that everybody has acquired the necessary basic knowledge for applying our tools to his question, the main reason for which people attain this course.

Do you have a prominent exemple of feedback from a trainee who has completed your training ?

"Two trainees, soon after the course, contacted us to tell us that they were convinced to use our approaches to address their biological question and asked for our help for designing the fine details of their setup."

During the first two years of the course, we got a lot of positive feedback and a lot of suggestions for improvement, as well. In general, people claim having attained their goal.  Some of them have also decided their optical strategy on the base of what they have learned in our course. We have for example the case of two first-year PhD candidates, one from the Leibniz Institute for Neurobiology and another one from the RIKEN Center for Brain Science in Japan, who, soon after the course, contacted us to tell us that they were convinced to use our approaches to address their biological question and asked for our help for designing the fine details of their setup.